From Portland's queen of sex-positive theater, a little bit of love at the OUTwright Festival and on its way to the Edinburgh Fringe.

Back in the 1980s a good friend of mine went to Taipei to study Mandarin, and while he was there he taught English to teens. Early in one class, he asked his students to choose names in English. As he went around the room, though, he looked at what one girl had written down and blanched a little. The name she wanted to be called was “Pussy.”

She looked up at him, puzzled. “Why not? It means a cat, right?”

Plan V, a show she’s fine-tuning to take to the Edinburgh Festival Fringe in August, is a sort of TED Talk-cum-revival meeting set a decade in the future, when the society-wide benefits of the plan are being revealed. There’s no shrinking from the carnal: Before the performance even begins, music wafts through the room, a woman crooning to a low-key R&B jam, “I want pussy just to taste, I want pussy in my face.” But O’Brien is an idealist at heart, and she tries to show us not just a future bright with pleasure but one thereby redeemed from the ills of an oppressive patriarchal history.

O’Brien portrays a wide variety of characters in the show, which is structured like a lecture/meeting taking place at once in person and online. She starts off in the guise of a Mormon woman named Vana Ramsey, clad in a pink-ish peach silk jacket, who holds court as a combination preacher/prophet/ringleader/motivational speaker. Her presentation drips with jargon (“vitamin touch”), mottos (“pleasure shared is pleasure squared”), bad puns (“let us splay”) and even hand signals (I’m pretty sure Richard Nixon meant something different when he held up a two-fingered “V”). And, starting from a bit of loosely employed developmental biology – that female sex organs are our embryonic default unless hormones kick in to redirect their growth – she begins to build a case for a universality and even a spirituality based in the “life-force energy” and “erotic energy” of pussy. “Knowing that we all start out with a pussy reminds us that we can all tap into that,” Ramsey says.

Though there’s a lot in this section that feels like a sales pitch, the notion is that the worship of the V (standing for vagina or vulva) has been taking hold, leading to social transformation. Ramsey references the terrible anxiety of the early 2020s as a thing of the past, and suggests that orgasms have become effective at reducing drug addiction.

Comments from online participants allow O’Brien to portray others who testify to Plan V’s efficacy in their own lives. Some of these folks are male, some female, some brassy, some shy; there are Canadians and Texans, etc. But primarily we hear, in a “breakout room,” from someone named Eleanor, who starts by alluding, all at once, to her teenage confusion, a common social hypocrisy, and the age-old Madonna/whore dichotomy:

“What I learned from the patriarchy is that pussy is gross; and also the most important thing about me.”

It’s to O’Brien’s credit that this doesn’t all tip into comedy, except when she wants it to. Indeed, the earnest yet good-natured enthusiasm of the affair, along with O’Brien’s sharp sense of timing and vivid character sketches, keeps it all engaging, entertaining, maybe even convincing.

If O’Brien had been teaching that Taiwanese girl, no doubt she’d have applauded the name Pussy. After all, what’s in a name? In this case, perhaps, life-affirming pleasures. 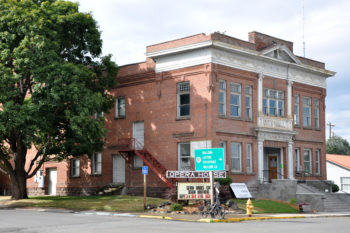