Inspired by her father’s Alzheimer’s Disease and by the general theory of relativity, Marissa Rae Niederhauser’s new production at Performance Works Northwest takes us through both the beauty and the tragedy of time.

We enter Linda Austin’s Performance Works Northwest to see movement and performance artist Marissa Rae Niederhauser pushing a chair with a radio on it. Clad in a cotton, olive-green short jumpsuit, she steps slowly, gazing into the distance before her. The radio emits the distinct sound of white noise, tuning in and out depending on its point in the room.

Eventually, a back door opens and out steps audio engineer Juniana Lanning, who will play not only the role of real-time abstract musician throughout the 75-minute length performance, but that of participant, as well. Lanning sets the scene by placing vinyl players, tape recorders, radios, and other sound devices around the stage. She is joined by actor Daniel Shaw, who adds chairs and tables. Soon, they will evolve from stagehands to performers as they take their place among the objects and begin their monologues.

Originally from the high deserts of Northern Utah, Marissa Rae Niederhauser received her Bachelor of Fine Arts in Dance from Cornish College of the Arts in Seattle, Washington, and was most recently working as an artist in Berlin before relocating to Portland in early 2020. While spending time with her father in a dementia care facility, she decided to create a devised study of correlations between Alzheimer’s Disease and the general theory of relativity, utilizing complex soundscapes to deal with both the beauty and tragedy of time.

In the production that resulted, “Record Rewind replay record…”, we once again revisit the analog as a means of connection to the past. As ‘outdated’ technology becomes more commonly seen throughout underground and mainstream art mediums during the current ‘nostalgia era’, however, it is important to consider the societal, as well as the personal relationships found between artist and item. Niederhauser, in the midst of this, manages to reframe a general fixation on the analog as a portrait of the self and the empathetic feelings towards her father. Through pedestrian movements, narrative verbalizations, repetitive speech, a cacophony of abrasive sound textures, and distance duets, the three performers create an overlapping triptych that tells a cumulative story of loss, memory, intangibility, care, and acceptance. The audience is asked to split their attention and is, therefore, pleasantly challenged by the rift between present moment, past, and its replication.

There are moments in the piece where the performers share in a delicately awkward movement style; becoming activated by sound cues to spin without grounding, enacting a dance class in which they sway side to side, and holding hands to rejoice in a tender turn. Rather than disturb the fluidity of the work, these moments harken childhood, presenting a frame of rewind, revisiting, and as the performers verbalized, “…getting back to where you were before.”

“Somehow we got lucky…” Niederhauser also repeats throughout the work, oscillating between presenting the phrase in context and obscuring it with a variety of other texts and noises. With this phrase, she taps into the positive pleasure of noticing your own presence and finding silver linings in otherwise hopeless situations, while creating a sense of horror at the idea of missing out.

In a nuanced and heartfelt expression, Niederhauser is able to represent generational trauma and the hardships faced by those caring for ailing family members without forcing the viewer into sorrow. Utilizing the mysterious notions behind synchronicity coupled with the innate human search for comfort and our expansive ability for empathy, she instead delivers a unique and captivating exploration of time—to which we are the fortunate witness.

Tickets to “Record Rewind replay record…” are still available for Saturday, November 19 and Sunday, November 20 at 7:30 p.m. through the Performance Works Northwest website. 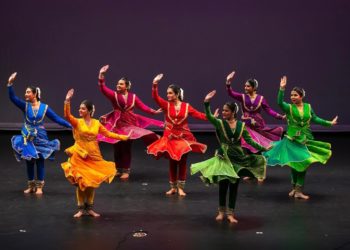 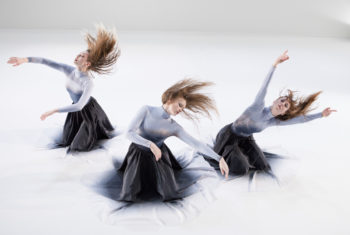