NEWPORT — He’s one of Newport’s most famous former residents, but unless you’re a classical music buff, odds are you haven’t heard of him.

That would be Ernest Bloch, the composer known in his day as the fourth B, after Bach, Beethoven and Brahms, and who composed one-third of his world-renowned compositions in an oceanfront home in Newport’s Agate Beach neighborhood.

Thanks to the efforts of Frank Geltner and a group of volunteers, Bloch’s legacy will shine more brightly. The new Ernest Bloch Memorial Wayside, located next to the street where Bloch lived from 1941 to his death in 1959 at age 79, will be dedicated Wednesday, July 18, with events continuing through the weekend.

Bloch discovered Newport while traveling from his son’s home in Portland to the University of California-Berkeley, where he was delivering a series of lectures.

“He arrived at the height of his career,” said Geltner, who is the “flamekeeper” of the Ernest Bloch Legacy Project. “All metrics which can be mustered give testimony to the impact this composer has had on his profession. Perhaps the number of recordings give the scope: about 850 CDs and 400 LPs. Perhaps the number of major awards. Perhaps when you search the name Ernest Bloch online to discover nearly 600,000 hits.”

In 1937, a group of enthusiasts founded the Ernest Bloch Society in New York, with Albert Einstein as its first president. Einstein had played informally in chamber orchestras on the East Coast with Bloch’s daughter, Suzanne, where he sometimes irritated the other musicians by not coming in on the beat, according to Geltner. Ms. Bloch once complained that when it came to music, the great mathematician couldn’t count, Geltner added.

Bloch’s most famous work is likely Schelomo, Geltner said. “That is most definitely the one piece you will find played most frequently in concert halls around the world.”

Yehudi Menuhin, an American-born violinist and conductor who was one of Bloch’s students, wrote of his teacher: “He was the musician as Old Testament prophet, whose speech was thunder and whose glance lightning.”

Geltner became aware of Bloch and his Newport connection in 1999, when he moved to the coast to become executive director for the Oregon Coast Council for the Arts. There was a summer Ernest Bloch Music Festival, which ran from 1990 to 2006, when it was canceled after the founding organization decided to focus on the symphony orchestra and drop the festival, Geltner said.

“What I observed was that the festival was about music, but not a whole lot was done about the man,” Geltner said. “I thought Newport could benefit from celebrating the memory of this man who is world renowned and whose work continues to be performed throughout the U.S., Western Europe, China, and Japan.”

Geltner won a grant from the Oregon Arts Commission to create a booklet on Bloch, including interviews with people who had known the composer. The grant included moving the Bloch memorial from a wayside, in front of a motel sign, to the Newport Performing Arts Center. Geltner described the original memorial as largely “ignored, overgrown, and more like a gravestone than a monument.”

In 2009, inspired by a street sign he saw in Bloch’s hometown of Geneva, Geltner persuaded the Newport City Council to create Ernest Bloch Place at U.S. 101 and Northwest 49th Street, near the street where the composer had lived. The Bloch memorial recently was relocated there, and the new wayside will include a monument and five benches, each named for donors who contributed $1,000 to a fundraising campaign.

Efforts to purchase Bloch’s former residence, owned by a Salem church and known as Sea Krest Lodge retreat center, stalled when the church decided not to sell. Geltner remains hopeful that one day the house, which was built in 1914 and is listed on the National Register of Historic Places, will again stand as a monument to Bloch, perhaps as part of the Oregon Parks heritage series.

“I fully expect that somewhere down the road the church will part with the building,” Geltner said. “I hope at that time we can convince the powers that be that this is important. The story of Ernest Bloch is just so rich with storytelling. He was just such a fascinating person and had an amazing output. Newport could benefit from telling the story of this man.” 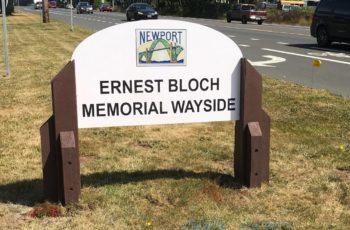 Dedication activities begin July 18, with Bloch Talks scheduled from 10 a.m. to noon Wednesday, Thursday and Friday at the Ernest Bloch installation on the south end of the Ernest Bloch Memorial Wayside. Talks will feature Alexander Knapp and Frank Geltner informally reviewing the story of the composer, his life, passions and music.

From 10 a.m. to noon Saturday, July 21, at the Pacific Maritime Heritage Center, Knapp will lecture on “Musical Style in Ernest Bloch’s Agate Beach Works.” Erin Adair and Ramona Martin will perform Bloch’s Suite Modale, for flute and piano, which Bloch wrote in 1956 while living in Agate Beach.

Afterward, at the wayside, the memorial will be dedicated from 2 to 4 p.m. Speakers are scheduled to include Bloch’s grandson, Ernest Bloch II, and his great-granddaughter, Lucienne Allen.