Stephen Hayes: A Guggenheim will fuel ‘In the Hour Before’

A few days ago, the John Simon Guggenheim Memorial Foundation named the recipients of its 173 Guggenheim Fellowships in the areas of scholarship, art, and science. Among 24 other painters from around the country who received this year’s honor was the Portland painter Stephen Hayes. Hayes has been working on a project, titled In the Hour Before, to reimagine depictions of spaces, sites, in painting.

In this body of work, now supported by the Guggenheim award, Hayes examines the violent American social context by depicting the sites of shootings—places like Newtown, Charleston, Orlando, Roseburg, and others. This undertaking is for Hayes, a way to respond to the “grotesque reality of an escalating physical and social violence in America,” related specifically to “racial inequity, economic disparity” among other issues—as he described in proposing In the Hour Before to the Guggenheim Foundation.

Thanks to the award, Hayes is set to complete In the Hour Before, “traveling” by way of Google Earth, “to the burgeoning number of sites of shootings throughout the country, and making paintings in response to these places as they were witnessed benignly, without comment or bias, by the impersonal technology of cameras mounted on cars,” as the artist remarked.

This content marks ongoing change in Hayes’s work—as he described in his interview with our own Paul Sutinen last year — but his compositions retain a singular approach to discerning, rendering. “Such deft blending of representation and sheer abstraction underpins Hayes’s eminence as a supreme kind of painters’ painter in the Pacific Northwest,” wrote Sue Taylor in Art in America in September of 2016.

Hayes’s handling of paint treads the line between abstraction and representation, and his sense for the conceptual in painting always seems in keeping with his formal subjects. Hayes says that a painting “can pay poetic homage to the lives and places at the heart of each story. In fact, we are ALL at the heart of each of these stories. I believe that real solutions to this will only come from contemplation, reflection, deliberation, and conscious action.”

Hayes was included in More Than a Pretty Face: 150 Years of the Portrait Print at the Portland Art Museum in 2010, and also received the Hallie Ford Fellowship in Visual Arts in 2011. The Guggenheim is a national matter, and past Portland winners have tended to be writers: Paul Collins, Peter Rock, Tom Bissell, Dan O’Brien, among others. Each year since its inaugural year in 1925, some 3,000 applicants vie for the fellowship; Hayes’s award is no small thing to a working artist, teacher, adherent of visual art. The list of 2018 fellows — including Pulitzer Prize-winning writer Tyehimba Jess, writers Teju Cole and Min Jin Lee — can be read in its entirety on the foundation’s website. We caught up with Hayes to hear how news of the Guggenheim award has hit him.

Where were you when you learned of your having won the Guggenheim Fellowship Award?
I got the notification that my project had been forwarded to the Board of Directors for approval by email in the middle of an ordinary working day. I was in the middle of a Color Theory class and while on break I checked my email. I wasn’t sure that I was reading the message in the right way and was a little off balance. I had to forward it to Linda [Linda K. Johnson, Hayes’s partner] for interpretation!

In your interview with Paul Sutinen last year, you talked about your “ability to challenge your thinking or to find context for what it is you’re doing.” Is this award a landmark in your career, relative to your approach, how you’re working and seeing in the context of 2018?
The award would be a landmark for anyone. It recognizes decades of work already made, but more critically it provides spiritual and financial support for unseen work in the future. I am already deeply engaged with the project that I proposed to grow. In the Hour Before is a body of work unlike any other that I have made, and I am continuously looking to understand my relationship to the project, my process and its impact on me every bit as much as on you.

I really love what you had to say (last October) about beauty having very few limitations. How has this outlook changed since then?
I am as surprised as anyone that beauty can exist so seamlessly side by side with horror. It is very confusing. I find myself wondering if we don’t have the ability to see this dichotomy as some kind of a paradoxical safety net; part of our limbic brain that protects us in an almost prehistoric way.

What’s next for you in light of having won this award?
I am deep into the final term of teaching for the year and have plans to be more fully in my studio as soon as possible. In preparation for that day I am gathering information, making stretchers, stretching canvases, gathering materials and trying to share the moment generously with my family and friends. Once in the studio… it’s on. 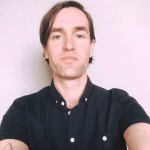