Harmonic Laboratory’s most recent experiment investigated the question: Can a creative cooperative based in digital media, dance, and music successfully add a new theatrical element to its existing compound to produce an integrative, immersive multimedia experience? This lab report examines the results. 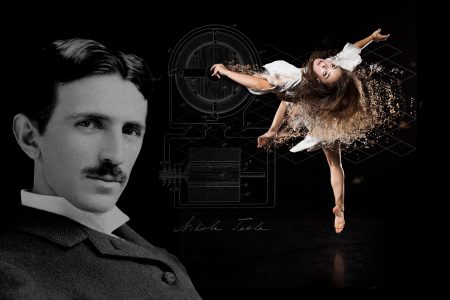 By adopting a recognizable subject that contains a built-in historical narrative, and adding onstage experiments to its newest performance, Harmonic Laboratory can broaden both its artistic scope and its audience.

Tesla opened with a greeting from Garner, a brief overture, and a physics demonstration before actual stage action commenced: a Serbian roots group dance invoking Tesla’s southern European origins through an inward-facing, circular folk-dance like piece.

The next full dance number was inspired by Tesla’s invention of alternating current, followed by another physics demonstration. The first half closed with a bound-flow dance duet symbolically reflecting Tesla’s rivalry with Thomas Edison and a solo spotlighting Tesla’s showmanship, which helped him win support for his visionary ideas.

The second half began with animation inspired by energy field patterns and accompanied by Delgani Quartet’s performance of Schropp’s pulsating score. A pair of full company dances followed, one featuring projected white bird like animations recalling Tesla’s late in life affection for the pigeons who were often his only companions in the New York hotels he called home, and a second suggesting his ideas about wireless communication, some of which fueled the development of radio and later wi fi.

Another physics demonstration ensued before the show ended with a series of group dances accompanied by often dazzling, if sometimes predictable, animations and complementary music inspired by later chapters of Tesla’s life and the great inventor’s legacy.

Yet however effective they might be in the classroom, the demos fell flat onstage. While Dr. Stan and Walter exuded friendliness and approachability — these aren’t stiff white coat drones — on stage, the unscripted, almost impromptu tone felt meandering, as though the audience was too distant for the performers to judge how they were responding. Awkward pauses and time-filling verbiage prolonged the stasis.

The experiments — performed in real “science time” rather than the stage time we’re unconsciously accustomed to in this setting — lacked enough contextual set up to convey their significance, either to Tesla’s career or to history. Most of the demo talk was instead devoted to explaining the procedures — without showing why they mattered. Sometimes undefined terms like “resonance effect” popped up that even those of us who had a couple years of physics in school might well have forgotten, and others might never have known.

Park’s high-voltage projected animations also sporadically energized the show’s second half. While some of the dance sequences really sizzled, like a tightly drawn black/white oppositional duet representing polarity, others fizzled, losing energy as they stretched on too long. The music  generally supported the scenario and action well, with the electronic passages especially complementing the science-oriented sections, for example incorporating what sounded like a sample of the sound of a sparking Tesla Coil into the score. Lighting and costumes added little.

Tesla did provide many entertaining moments of music, dance, and visual art, and emanated an enthusiastic attitude toward its subject in particular and science in general. But this production failed to support Harmonic Lab’s hypothesis that invoking a historical subject alone would add a compelling performative dimension to their multimedia creations.

The experiment revealed the absence of a number of factors crucial to audience engagement.

• Shorn of the onstage experiments, the static first half hour, and the overextended portions of its existing sequences, Tesla would likely be more effective in a one-hour, no intermission format, using most of the remaining current material and maintaining its largely non-narrative approach. Such further experimentation is recommended.

• Whether a narrative or non narrative approach is ultimately used, tie expository material more closely to stage action, and move it faster. While we might hypothesize that a fully scripted educational presentation (assuming that dimension is retained) might come off as stiff, it would have certainly been tighter than the present improvised experiment narration, perhaps providing more cohesion among the seemingly disparate and disconnected art forms.

• If a more fully realized narrative approach is adopted, a few brief scenes involving dialogue between Tesla and other figures at various turning points in his life (his early supporter George Westinghouse for example) dramatizing basic conflicts among Tesla’s erratic genius, prevailing social, technological and financial realities, and  his (in)ability to make other people buy into his vision might establish an emotional arc that the dances, projections and the rest could then support.

• To truly fulfill its goal of a richer, time-based performance, and tie its disparate multimedia components together in a cohesive way, Tesla needs actual theater. Future iterations would benefit from least two entirely new contributors: a writer adept at constructing dramatic narrative, and a director who could provide an outside perspective on the overall structure, pacing, flow and resonance of the performance. Given sufficient funding, it could also employ a couple of theatrical roles in the development process: a dramaturg, who keeps an eye out for continuity, logic and zeitgeist, tracking all theatrical intentions and their iterations for the sake of the audience; and a stage manager (or director) who watches the show from every seating section, to ensure that the entire audience can follow the full-breadth of the action onstage. Future experiments should consider adding these crucial theatrical elements.