The Week: See you in the dock

Autumn settles in swiftly across Oregon, and with it the rhythms of a new cultural season.

AUTUMN’S SETTLED IN EARLY ACROSS MOST OF OREGON, and with it the rhythms and traditions of a new cultural season. Music, theater, dance – each has its own history and pattern, its own set of rituals.

Corey Brunish, the Portland and New York performer and producer who has a handful of Tony Award statuettes as a producer on Broadway, has just been named one of more than two dozen nominees for this year’s Broadway Global Producer of the Year Award, on a list that also includes the likes of Gloria Estefan, John Legend, and Jada Pinkett Smith.

Brunish, whose nomination is for the aggregate of his Broadway work, has an abiding love for the rituals of the theater, and often expresses it in musings about the still time before the curtain rises. He wrote this one, he says, during a California run of the new musical Empire, about the building of the Empire State Building, a show that’s still trying to raise backing for a Broadway run. But, he adds, it could be any show, any time, anywhere:

“As I sit here enjoying the stillness of an empty theater an hour before the audience arrives for yet another opening night, I am reminded that this is my favorite part. I have been and continue to be an actor/writer/director/producer in the theater, but this love of the calm before the storm of bodies filling the theater probably stems from my days as an usher for the Shuberts. … I enjoyed the ritual of making sure that the theater was tidy, spotless, ready for an audience who, after all, deserve to begin their experience with a fresh palette. Whether the house seats 30 or 3,000, the evening of theater begins with stillness and ends (hopefully) with rapturous applause. I love the cooperation involved in theater — everyone working in concert to make something: A gift for the audience. … So tonight, a brand new gift for a brand new audience for a brand new day.”

“A Broadway musical is like a great ship,” Brunish adds in another dispatch. “A ship that gets under way nearly every night.

“When the moment arrives (usually at exactly 7 minutes after the appointed hour) the conductor prods the players to commence.

“Off on a two and half hour journey wherein we learn about the characters, their plight, their destiny. We laugh with, we cry for them, and maybe even hum along (quietly!) as they sing of their hopes and dreams, fears and frustrations.

“Intermission brings a lobby abuzz with insights and delights, predictions and praise.

“And when the final bow is done, we are the better for it. We have taken a journey.

“We have been changed, if only for an evening, but maybe for a lifetime.

AND WHAT BETTER DOCK TO SIT ON, right now in Portland, than the musical dock that’s taken up residence at The Armory – the “transportive musical time capsule” In the Heights that’s sweeping Portland Center Stage audiences back to the early 2000s and Washington Heights in New York? Lin-Manuel Miranda’s pre-Hamilton hit, which he wrote with the playwright Quiara Alegría Hudes, mixes rap and salsa into the Broadway blend to create its tale of immigrants from Cuba, Puerto Rico, and the Dominican Republic. Read Shawna Lipton’s ArtsWatch review here.

AN AMERICAN STORY IN BLACK AND WHITE

LONGTIME OREGON PERFORMER AND WRITER SUSAN BANYAS grew up in the small city of Hillsboro, Ohio, at a time when the city became a flashpoint in the civil rights movement and the struggle to integrate schools. Over the years this story has become central to her own art. She’s told it, onstage, with music. She’s spent years researching details, talking with people she knew from her childhood, arranging and rearranging an important American story. And now she’s published a book, The Hillsboro Story, from which she’ll read at 7 p.m. tonight – Thursday, Sept. 17 – at Broadway Books in Northeast Portland. “The Hillsboro Story is Banyas’ own Soul Story, on paper and writ large,” Marty Hughley writes in his review and interview for ArtsWatch.

MUSIC: HOW TO DECIDE WHAT TO HEAR

“I KNOW WHAT YOU’RE THINKING. ‘HEY, MR. MUSIC EDITOR GUY, how the [redacted] am I supposed to pick one of these million shows you’re always telling us about?” Matthew Neil Andrews writes in his new MusicWatch Weekly. “Normally, you might use genre as a guideline. But genre is dead and can’t help you anymore. Instead, I have three recommended methods for picking a weekend of concerts. First: rely on institutions. Second: use this newfangled interweb thingy to listen ahead of time to whatever’s happening on whichever morning/afternoon/evening you happen to be free. Third: ask your friends!” And that’s just the beginning.

ART WORTH PAYING ATTENTION TO HAPPENS ALL OVER OREGON, as our columnists David Bates and Lori Tobias continually remind us. In Falling for wine country arts, Bates, who’s based in Yamhill County, takes note of a busy fall season that kicks off with several gallery shows, a Greek theater festival, a literary unsolved mystery, some opera on tap, and more. In Dualing and dueling at the easel, Tobias, who’s based in Newport and covers the coast, tells the tale of two painters who play musical easels in a game of playful oneupsmanship. They’ll be at this weekend’s Earth & Ocean Arts Festival in Cannon Beach.

TBA, PORTLAND INSTITUTE FOR CONTEMPORARY ART’S ANNUAL FESTIVAL of usually edgy performance, is gone but not forgotten for 2019. The festival, which sprawled across the city Sept. 5-15, was as always a blend of the enthralling and the head-scratching. In TBA report: aggressive whimsey, meditative chaos, kinetic violin, Martha Daghlian reviews performances by fiddler Laura Ortman, filmmaker Takashi Makino, and the company Gawdafful National Theater, with its continuing run of The Dope Elf.

CHALK THIS ONE UP TO EXPERIENCE; ALMOST 30 YEARS OF IT. On Saturday Forest Grove’s 29th annual Sidewalk Chalk Festival will fill the town’s pavement with color: It’s an all-day event, from 8 in the morning to 4 in the afternoon. You might recall Chalk up another win for art, Joe Cantrell’s vivid August photo essay about Beaverton’s La Strada dei Pastelli Chalk Art Festival, which brought in chalk-art pros from around the U.S. and Mexico. Forest Grove’s approach is more egalitarian: You register, pay an eight-buck fee that covers the cost of a tray of chalk, and claim your chunk of sidewalk for the day. If you just want to watch the action, it’s free. “There is no judging,” organizers say, “only admiration.” That’s a slogan worth at least another 29 years. 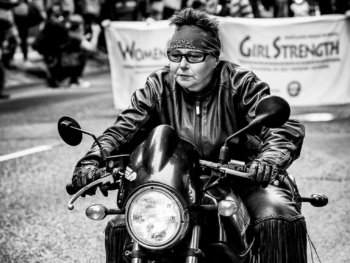