The Waldport cartoonist has been a cartographer, written a book about an Oregon cult, and traveled the world.

There’s a woman in Waldport who sees the world differently than most — a slightly cockeyed view rooted in her funny bone, honed by an unconventional past, and manifested in decades of creating cartoons.

Theresa McCracken has an offbeat perspective known to many on the Central Oregon Coast from her monthly cartoons created for the Drift Inn in Yachats.

Restaurant owner Linda Hetzler, a longtime friend, was looking for a way to drive web traffic for her business’ Facebook page, and hit on a caption-writing contest — entrants can submit captions for McCracken’s cartoons and win a prize.

“I have no idea” is the artist’s response to the question she’s often asked: How do you get your ideas? “They just come.”

The results can be silly, sophisticated, goofy, or sharp. Like the top-seller featuring two Druids at Stonehenge struggling to install a giant obelisk. Caption: “I hate changing from Daylight Saving Time.” Or the couple seated in the Drift Inn, eyeing winged pigs flying past the window. Caption: “Maybe this means Yachats will get a gas station and a bank.”

McCracken’s route to professional cartooning started early and zigzagged around the globe.

“I had wanted to be a cartoonist since I was 8,” she said. “My parents were perpetual grad students, and they ended up teaching at Michigan State University.” While they taught, “I sat in the back of class and colored.”

Years later, she graduated from the University of Michigan, where she studied geography. That interest landed her a job at the National Oceanic and Atmospheric Administration (NOAA) in Washington, D.C., where she worked as a cartographer for three years.

“We went through every map ever made, like the folded ones you used to get at gas stations, and nautical charts … it was really the starting point of the GPS,” or global positioning system, the satellite-based navigation utility that guides millions today.

She left NOAA after having saved enough money to spend the next few years developing her cartooning career. “I’ve never taken a job because of the money — only those that interested me.”

As she began her cartooning work, she also worked as a bicycle courier and as a scientific illustrator for the Smithsonian Institution.

Cartoonists — like artists of all types — are notoriously under-employed, but McCracken found a niche.

“I lived six blocks from the Library of Congress, and there I discovered trade journals — there were miles of them, and I approached them with ideas.” As a result, her resume of publishing titles is jam-packed, from Adhesive Age to Wyoming Rural Electric News.

More exotic adventures were to come, however.

In the 1980s, McCracken’s best friend in Washington, Susan Garner, joined the Peace Corps and was sent to Lesotho, a small country surrounded by South Africa. McCracken tagged along, then traveled around Africa by herself. They both then hitchhiked from Lesotho to Zaire (now the Democratic Republic of the Congo), then took a barge 1,500 miles down what was then called the Zaire River to Kinshasa.

Garner returned to the United States, drove cross-country and stopped in Yachats. The two pals re-united on the Oregon Coast, where Garner and her partner were working with the Angell Job Corps, which was run at the time by the Forest Service.

A firefighter? Why not?

“I really wanted to be a firefighter,” said McCracken, 64, so she did just that, spending summers on the coast, winters in Washington D.C., and “driving my great-aunt’s 1951 Plymouth back and forth across the Rockies until it died.

“That’s how I ended up in Waldport,” she laughed.

In 1990, she bought a piece of land near the upper Alsea River bay and an old, leaky house trailer. With the help of friends, McCracken set about building her home. She calls it “the most extraordinary accomplishment” of her life, living for years with no electricity or running water. Meantime, she worked as a naturalist at Cape Perpetua, then with Hetzler (who was also working for the Forest Service) restoring the Heceta Head lightkeeper’s house.

Today, McCracken works out of that Waldport home, a two-story house that measures 28 feet by 28 feet and is filled with mementoes of her travels. Bookcases overflow with volumes in most rooms, especially the upstairs studio that doubles as a guest bedroom.

Among the titles are another zig in her zigzag life — a true story of sex, religion, and scandal called Holy Rollers: Murder and Madness in Oregon’s Love Cult that she co-authored.

Published in 2002, the book unearths the sordid tale of Edmund Creffield, a German-American who started a cult in Corvallis in 1902. Most of his followers were women from highly respected families, who followed Creffield to Portland and then Waldport (including a camp near Yachats). The true story — replete with adultery, “free love,” and tarring and feathering — ends in murder.

McCracken’s property is “where some of the main characters squatted when it was an Indian reservation,” she said. In researching the history of the land, she was alerted to a note saying “Check the insane asylum records.”

Who could resist that? she asks.

At the same time, her eventual co-author, Robert Blodgett of Corvallis, connected with McCracken via the Lincoln County Historical Society. He brought her “a file cabinet full of newspaper photocopies” of the scandalous tale, and McCracken proceeded to write.

“We had our first book signing at a place in Yachats called Shirley’s” (now the Ya-Hots Video Country Store). The day before, Shirley called McCracken and said, “The book’s been bought out; do you have more copies?”

The cartoonist feared that the early buyers were going to burn all the copies, because the story of Creffield and his cult was hushed up. “We were always told to not talk about it,” McCracken said an anonymous, elderly Waldport resident told her, “and I’m not going to.”

McCracken stresses that Creffield’s followers were decent people who, for a variety of reasons, fell under the spell of a charismatic man who called himself “Joshua, the Holy Prophet.”

Today, things have calmed down for McCracken. Life is good in her country home, with her dog Sammy, Jr., and cat, Pipsqueak — except when copyright thieves strike. All of McCracken’s cartoons are her property and protected by copyright — though she’ll happily customize any of her work, or sell an existing one for a small fee, or license unlimited use starting at $100.

If that doesn’t deter copyright violators, an outfit called Cartoonstock in Great Britain will. On her behalf, the company scours the Internet for copyright violations; each carries a $100 penalty.

That thorn aside, McCracken seems content to enjoy her work and the privacy of her home. “My wanderlust is gone,” she said. “I love this place.”

But she continues seeing the world differently and making people laugh. And that’s a 20-20 gift. 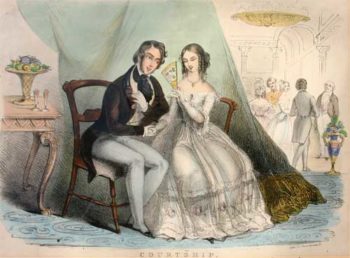