The Portland artist is donating 100 percent of the proceeds from pieces sold -- more than $60,000 so far -- to GlobalGiving's Ukraine Crisis Relief Fund.

The late afternoon sun shines through the windows of the Corvallis Arts Center, projecting beams of light across the showroom. The golden sun pools across Tatyana Ostapenko’s piece I’ll Take You There. The painted cheeks of beaming Ukrainian women glow as they pose, hand-in-hand, in front of a bold backdrop of blue and yellow. The colors of the Ukrainian flag — masterfully washed across unprepared canvas — saturate the room. The Arts Center is filled with this bold reflection of joy and resiliency.

Ostapenko, Ukrainian muralist and painter, is featured through May 14 in The Arts Center’s Looking at Us exhibition, alongside artist Tim Timmerman of Newberg. Ostapenko’s work has garnered the attention of the arts community across Oregon not only for her unique take on the Russian realist style and gorgeous acrylic pieces but also for her acts of mutual aid in response to the Ukrainian crisis.

Hester Coucke, curator for the Looking at Us exhibit, said the rising tensions between Russia and Ukraine drastically changed original plans for Ostapenko’s show. The pieces featured on the Arts Center’s walls were painted in the 10 days prior to the show’s April 7 opening, because Ostapenko sold many of the pieces she’d originally planned on hanging to raise funds for her home country.

Asked if painting is her way to process the war, Ostapenko said, “I do not understand how I could process this situation on canvas. My processing is through activism.”

Ostapenko immigrated to the United States from Ukraine as a teenager in the late 1990s. She didn’t begin as a professional painter but rather worked as a Russian language translator, perused car auctions, and sold band merchandise. She received her BFA from Portland State University in 2015, returning to college 10 years after receiving her Bachelor’s degree. Today, Ostapenko lives in Portland and works as a full-time painter and muralist.

“I wanted to be a painter for as long as I remember,” she said, “but I didn’t make my first painting until well into my 30s.”

The realism style in Russian art has a rich and fascinating history. Peredvizhniki, a group of traveling students compelled by political rebellion and independence, sparked a turning point for Eastern European artists in the late 19th century. These students, and those whom they inspired, highlighted social inequities and blue-color work in their art. Much of Ostapenko’s own art follows this tradition.

“My paintings are in equal measure a wistful childhood memory and critical inquiry into the recent history of the former Soviet Union and the daily lives of people who will never make it to the official historical records,” she said.

It’s impossible to ignore the correlation between the current political climate and Ostapenko’s powerful work. “I admire hope,” she said. “The people of Ukraine are very strong.” In one of her large pieces, Real Housewives, an older woman – a babushka – is painted with joyous, smiling eyes, adorned with bold flowers and accompanied by the soft but sturdy presence of a watchful cow. These moments that Ostapenko captures, even through minimalist brushstrokes and limited detail, make her subjects more than paint on a canvas.

“My subject matter picked me a long time ago,” she said. “I just have to look over my shoulder – all of my people are behind me.”

With Ostapenko’s talent for capturing human moments, it’s no wonder that one of her major artistic inspirations is street photography. With an intense love of observing and recording the world around her, she said she hoards images. Despite her passion for photography, she appreciates that painting allows her to slow down, communicating between herself and the subject matter. Though, for Ostapenko, “slowing down” is subjective – many of her largest paintings were completed in under 45 minutes.

I was immediately drawn to the blend of raw and soft gestures within Ostapenko’s work. In her piece Swing, a large portrait of a woman swinging an ax in a broad field, there is a strong dichotomy between the sharp angles and scraping marks in the grass and mountains, and the soft texturing in the subject’s skin and the clouds surrounding her. The subject’s anatomy is impeccable, with a small fold of her belly falling over her bathing suit bottoms and subtle highlights on her ribcage. Ostapenko’s work is multi-directional, experimental, and often what’s most important is what she doesn’t include.

Ostapenko’s work bears witness to the tragedy in Ukraine, but, she said, “I want to do a different job than what the American news is doing.” She has been commenting on the climate of Eastern Europe long before Russia invaded her home. Much of her work is a response to the prescriptive femininity she felt throughout her childhood. “I grew up into a contorted bonsai, shaped by the post-Soviet culture,” she said, explaining that her work reflects the agency robbed from her, exploring a woman’s place in the world, and discussing the “neurotic, insane pressure” she has felt.

Opening Ostapenko’s website, you see an immediate call to action: “Air raid sirens are sounding in my hometown — and across Ukraine. The people of Ukraine urgently need all of the help — and every penny — they can get. As of today, 100% of the proceeds of every piece sold will go to GlobalGiving’s Ukraine Crisis Relief Fund.” She has raised more than $60,000 and hopes to continue this form of activism.

Ostapenko is constantly exploring and working on new projects. She described an idea for painting the landscapes of small country areas around her hometown before they were decimated by the war. “Symbols and archetypes help me process my place of origin,” she said. “My representation of the people of Ukraine has weight as an immigrant artist — I need to be careful.”

When asked which painting is her favorite, Ostapenko responded, “the one I haven’t made yet!” 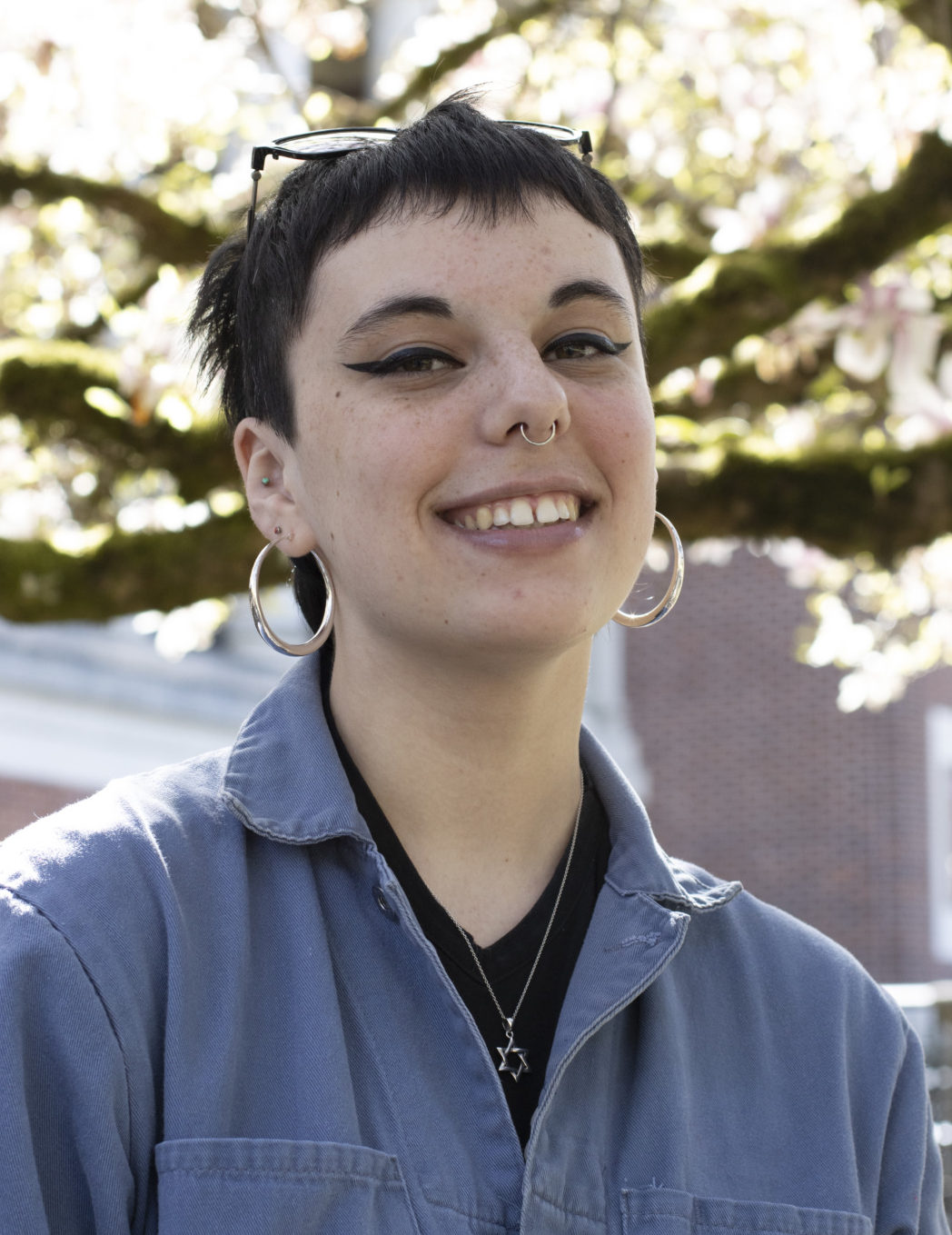 Tosca Ruotolo is a fourth-year creative writing and psychology student at Oregon State University. Focusing her major on creative nonfiction, Tosca enjoys consuming and critiquing many forms of media. When she’s not writing, Tosca is drawing, drumming, or recording podcasts for Oregon State’s art and lit magazine, Prism.

Tosca Ruotolo is a fourth-year creative writing and psychology student at Oregon State University. Focusing her major on creative nonfiction, Tosca enjoys consuming and critiquing many forms of media. When she’s not writing, Tosca is drawing, drumming, or recording podcasts for Oregon State’s art and lit magazine, Prism.