I’ve seen March arrive in Portland more than a dozen times, and yet still some part of me thinks “Ok, it’s spring now, right?” It’s not spring, and it won’t be spring for a while. It’s still winter, still time left in the unpredictable progression from spiteful to mightful to sometimes delightful. It’s easy to think things just won’t change. But we Portlanders go through this every year, filling the outdoor cafes as soon as the sun makes an appearance. It’s built into our constitutions to look for signs of progress and renewal when all seems lost.

Checking the news at any point is a quick reminder that the weather’s not the only thing that manages to be both unexpected and depressing in 2018. Even though the clouds haven’t parted yet, some big, colorful developments are already showing. Black Panther is smashing box office records and inspiring intelligent conversation about a comic book movie, vibrant portraits of the Obamas by Kehinde Wiley and Amy Sherald break the stuffy monotony of official presidential portraits, and the tough-as-nails students of Stoneman Douglas have already managed to budge the national conversation about gun control more than Washington has ever been willing to.

Likewise, our local artists and institutions aren’t waiting for the sun to come back to add some color and light to our city. March is chock full of smart, complex, and beautiful shows representing diverse perspectives. This list should give you plenty of chances to jolt the grey away.

As any exhibit of Cuban art in the US must acknowledge, the history of our two countries is complicated and hard to parse. This show seeks to challenge the “concoction of mistrust and mystery” that influence our perception of Cuban Culture. Though the Obama administration reestablished diplomatic ties with Cuba, el bloque (the blockade), remains in effect. Its lasting consequences of isolation have created flawed perspectives of the Cuban community.”

The work was collected by Red Ink, a website featuring Cuban graphic design run by local collector Beverly Walton who has traveled regularly to Cuba for the last 26 years, exhibiting and dealing in Cuban poster art in the US, where she continue to foster connections between design communities from her home base in Portland.

Sondra Perry at Disjecta:
March 17 – April 29, 2018
Curator: Julia Greenway
8372 N. Interstate Ave.
On the heels of her 2017 solo exhibition at The Seattle Art Museum, Houston-based artist Sondra Perry brings a more experimental approach to her show at Disjecta. Her interactive sculptural and installation work operates at the intersection of technology and black history. Drawing from science fiction, horror, and video game aesthetics, she “incorporates the vibrant chroma key blue to reference the production of special effects, allowing the viewer’s physical body to seamlessly slip into the artist’s imagined world,” according to the press release.  Worth noting, this is the last of four exhibitions of the Season 7 Curator-in-Residence Program curated by Julia Greenway. 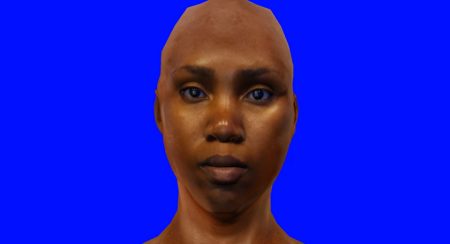 Invariants at Ampersand
Feb 10 to March 25
Ampersand Gallery and Fine Books, 2916 NE Alberta
This is another group photography exhibition, but one that engages photography as a visual field more than a presentation of parts of the outside world.

Invariants features photographic works by Erin O’Keefe, Clayton Cotterell and Jordan Sullivan. The show looks to be colorful, varied, and charming.Each artist is showing “images that look familiar but actually represent, by degrees, landscapes and constructs that are manufactured or manipulated. Cotterell’s washed-out city skyline, for instance, is devoid of specific details and yet the dozen or so construction cranes suggest creation in flux, a city redefined. O’Keefe’s photographs create a similar sense of uncertainty. They depict tabletop arrangements that she makes out of colored boards, transparent acrylic planes and painted sticks. But the camera is used to shift these sculptural forms into a more ambiguous and open-ended spatial condition.”

Imogen Cunningham at Hartman Fine Art:
Feb 22 – March 31
134 NW 8th Avenue
Some of Cunningham’s most iconic and intimate photographs will be featured, including her portrait of Frida Kahlo.

Vedem Underground at Oregon Jewish Museum
Through May 27, 2018
Oregon Jewish Museum and Center for Holocaust Education,
724 NW Davis Street
Called “the Dead Poets Society of Terezin” by the Jewish Journal, Vedem was an extraordinary, vibrant, handmade magazine produced by a collective of teenagers under terrifying conditions in the Terezin concentration camp during WWII. Vedem ran for 83 issues, published every Friday and usually read aloud as a means of distribution. The exhibit, Vedem Underground, explores the legacy of this extraordinary project through  pop-art graphics, drawings and paintings, and some of the poetry, prose and non-fiction written in secret as part of their attempt to defy and document their conditions. The 800 original pages from the magazine are reconstructed as if they were a contemporary magazine, showing the vibrancy and even humor that made Vedem a unique phenomena. Curated by Rina Taraseiskey and Danny King.

Apex Gallery: Venus Retrograde by Hannah Piper Burns
Feb 24 – Aug 12, 2018
Apex Gallery at the Portland Art Museum, 1219 SW Park Avenue
One of the founding members of the Portland Experimental Film Festival and director of Compliance Division Gallery, Hannah Piper Burns has an incisive back catalog of videos and installations of remixed meditations on pop culture and music. The Apex Gallery will be featuring the results of her deconstructive lens as applied to that paragon of Western Culture—the reality show The Bachelor From the press release:

“Through Burns’ use of editing, splicing, glitches, and repetition, she rips apart the seams of a stifling narrative to pull out pieces of the morass lying just beneath the highly stylized gloss.” With the shiny surface torn away, we’re exposed to the underlying “uncomfortable forces and paradoxes that define much of our own contemporary moment.”

Also of note: Painter Srijon Chowdhury’s second solo exhibition at Upfor Gallery opens on March 1, which means that for just one weekend you can see his new work and still catch his impressive show with Bobbi Woods, Endings at the Marylhurst Art Gym. We’ve been following his art and curation for a little while at Artswatch, and we like what we see.