Even the flames couldn’t destroy Joan of Arc. The 15th-century teenage revolutionary was infamously burned at the stake for leading a revolution, but her memory survived. Ultimately, she achieved sainthood and became a symbol of France itself.

Centuries after her immolation, Danish film director Carl Dreyer, a titan of silent cinema, made a magnificent 1928 movie, The Passion of Joan of Arc. After receiving rapturous acclaim, though, like Joan, the film fell victim to flame — all known copies were destroyed in a warehouse fire.

Once again, Joan rose from the flames, when Dreyer assembled a second version from outtake negatives. And yet again, that version burned in a second warehouse fire. Devastated, Dreyer gave up on Joan, but went on to make a series of film classics.

In 1981, workers cleaning out a hospital storeroom in Norway found some old tape reels that turned out to hold a pristine copy of Dreyer’s original The Passion of Joan Arc. Its re-release won worldwide acclaim all over again for its stark, striking depiction of Joan’s ordeal.

When New York composer Richard Einhorn discovered the film, it so enraptured him that he created his own musical response. His oratorio Voices of Light earned its own abundant accolades and a classical chart-topping 1995 Sony recording featuring acclaimed early music ensemble Anonymous 4. On Friday, Portland Youth Philharmonic’s Camerata PYP, In Mulieribus vocal ensemble, three Portland State University choirs and some of the city’s finest classical singers will perform Einhorn’s oratorio to accompany the Northwest Film Center’s screening of Dreyer’s film classic.

Like Dreyer and so many others throughout the centuries, Einhorn was drawn to Joan’s story of courage, sacrifice and conscience that transcended her short life and its time. “When you read her story and trial transcript, you get the sense of somebody who doesn’t fit into any notion of a medieval figure or a teenager,” he says. “She’s someone you’d like to know right now.” Just as Dreyer reflected that sense of timelessness by making Joan sometimes appear to float, Einhorn created “a musical language that could not be pinned down, a sense of floating outside of time, not being able to fit into a time period at all.”

To achieve that timeless quality, he drew on musical influences from widely separated eras, from contemporary minimalism and modern harmony to Baroque and especially medieval composers such as Perotin and Josquin from near Joan’s era. “That music connects with us because it’s emotionally very direct, intense, rhythmically driving,” Einhorn explains. It manages to sound both medieval and modern, broadly appealing even to listeners unfamiliar with classical or early music.

For the sung texts, Einhorn, who did extensive research on Joan’s brief life including visiting historical sites in France, chose poetry from another medieval composer, the abbess (and, like Joan, feminist icon) Hildegard of Bingen and other female mystics, as well as Joan’s own letters and words from her trial. He’s in Portland this week to work with the musicians and attend the concert.

Since its 1994 premiere, Einhorn’s oratorio has been performed, usually with the film, more than 250 times around the world, including at major venues and festivals like the Kennedy Center and performances in Australia, Europe, South Africa and beyond. That level of popular success is rare for any contemporary classical work. He’s gone on to create a number of successful compositions for dance, theater, and film and is currently developing a work revolving around famed inventor Alexander Bell and his less-well known connection to contemporary issues in deaf culture.

One of Einhorn’s favorite performances was led in New York City by David Hattner, a young clarinetist just then making the transition to becoming a conductor, who was called in to substitute for another conductor who’d withdrawn a few weeks before the performance. He’d never led an ensemble larger than a dozen or so players, it was his first big New York performance, and the performance contained so many moving parts — chorus, vocal soloists, orchestra, film. Yet Hattner’s “calmly authoritative” reading drew tremendous applause and praise from the New York Times classical music critic.

Hattner has been hoping to bring Voices of Light to Portland ever since he became music director of PYP in 2008. Support from various funders and partners including Northwest Film Center at last made it possible.

Einhorn believes the Portland performance will be the first by a youth orchestra, and maybe featuring the largest forces ever. Although the relatively simple score itself presents few technical hurdles for the orchestra’s top players in Camerata PYP, such a complex production provides a learning opportunity even for a crack group that has splendidly performed some of classical music’s toughest compositions. They play almost continuously for 80-plus minutes and can’t succumb to the temptation to glance up at the onscreen action — a challenge for 21st century teenagers. Hattner notes that the players themselves can relate to Joan, who was their age during her adventures and died a teenager. “We’ve been working on it since September,” Hattner says, “and they sound terrific.”

Hattner also says that this performance will be the first to use a brand-new digital frame-by-frame restoration of Dreyer’s classic. “It looks incredible,” he says. He insists that there’s nothing like experiencing the full majesty of Dreyer’s film and Einhorn’s music on a colossal screen — and sharing the experience live.

“It has the capacity to really hold people entirely rapt at attention for the entire 84 minute length,” he says. In New York, “when I was conducting it with 1,200 people behind me, I could just feel that intensity behind me that entire time. I noticed that even though we were performing in the middle of winter in New York, it took 20 minutes before somebody finally coughed. No one was making a sound. Even their diseases took a break. It’s that powerful.”

While Joan of Arc seems a timeless symbol for various causes and ideals throughout the ages, her story of a teenage girl’s torment at the hands of a patriarchal establishment may for many resonate differently today than it did in 1928 or even 1994.

“The piece takes on different facets that seem to come to the fore at different times,” Einhorn muses. “When I wrote it, one of the most important issues for me at the time was the religious clash between Joan of Arc having a personal vision of God and the Catholic church having a more corporate collective vision of spirituality. What’s come out now during the #Me Too movement is that women’s empowerment is much more at the fore recently when I’ve seen it again. [Church authorities] really had to turn up the heat on [Joan] because she refused to accept that kind of abuse. Of course, it was always there, just as the religious component is also always there, but the #Me Too movement at the moment is a fantastic way to highlight what we’ve been aware of all the time.

“This is something I really hadn’t expected. It’s a rare experience for a composer to have this kind of changing piece’s perception over time, but it keeps it alive.” 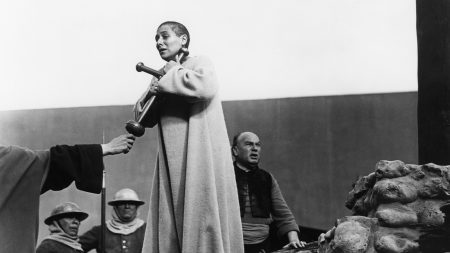 In conjunction with Voices of Light,  Portland State University will present PSU graduate Carolyn Gage’s award-winning, feminist, one-woman show, The Second Coming of Joan of Arc, starring Boston actor Julia Reddy on Saturday, January 27, at 4:00 PM in PSU’s 75 Lincoln Hall. The play depicts Joan of Arc as a lesbian runaway returning to earth. And through Feb. 4, the Northwest Film Center is also screening several other Dreyer classics, from 1925’s Master of the House through his final film, Gertrud, from 1964.

When our voices are raised together: Singing at Portland’s Maybelle Community Center