The Flaming Lips’ latest album King’s Mouth: Music and Songs was released April 13 in a limited-edition gold vinyl pressing of 4,000 copies for Record Store Day and will receive a worldwide release in all formats (digital, CD, vinyl, etc.) through Warner Bros. on July 19. Although music critics are heralding the album as a return to form that recaptures some of the magic of the Lips’ most lauded albums—The Soft Bulletin (1999) and Yoshimi Battles the Pink Robots (2002)—the record has an unconventional origin in an interactive art installation that was featured prominently at the Pacific Northwest College of Art in Portland.

“The King’s Mouth” was on display at The Center for Contemporary Art & Culture at PNCA from November 2, 2017 to January 6, 2018. During that time people of all ages came to have a transportive experience inside the school’s 511 gallery.

The walls surrounding the exhibit were lined with Flaming Lips creative force Wayne Coyne’s illustrations depicting the mystical story of a King, his giant silver head, and the rainbow denizens of his imaginary realm. Each of these images would go on to inspire a song on the album.

“The King’s Mouth” itself is a giant silver head with a gaping mouth and a pink, spongy tongue. You are invited to crawl inside into a cozy cavern where you can lay back and gaze upward at strands of lights synched up by Sachem Arvidson, a multimedia artist specializing in digital LED lighting design, to music masterminded by the multi-instrumentalist and core member of the Flaming Lips, Steven Drozd. The music builds from rhythmic and pulsing, to booming and rousing, with mesmeric lighting to match. If you stay for the duration, “The King’s Mouth” provides a phantasmagoric journey lasting around ten-minutes from start to finish.

Although students were initially skeptical about the exhibition given Coyne’s high profile as a musician, Coyne personally spent days installing the work and also creating prints with MFA students in the Print Media program. Many children and families, as well as community members who might not normally attend events at the art college lined up to experience the installation.

For the months it was installed, the rhythms emanating from the exhibit resonated through the halls of the school. I would sneak inside for private viewings at every opportunity, appreciating this portal into an elevated sensory experience right there in my workplace.

Since leaving Portland, “The King’s Mouth” has been shown at Meow Wolf in Santa Fe, New Mexico, and is currently on display at The Womb in Oklahoma City, the same place it was originally developed as a set piece for parties thrown by the Flaming Lips and their friends.

The Flaming Lips are a rock band, but also a container for the collaborations and creative experiments masterminded by Coyne. Coyne grew up sketching and drawing cartoons and has contributed much of the album art, posters, and aesthetic elements of the band. Coyne performs as a showman more than a singer, playing with the crowd and encouraging participation in karate chops and hand claps, as avalanches of confetti and balloons cascade down around him.

Despite the fun and frivolity of their stage performances, the band brings an exacting level of professionalism to all of its endeavors. The band consists of Coyne, Michael Ivins, Steven Drozd, Derek Brown, Jake Ingalls, Matt Kirksey, and Nicholas Ley. This seven-piece ensemble is basically always working on something—recording music, touring, and dreaming up new projects.

Drozd, the musical director of the band, brings the visionary and transportive qualities to the music. He hosts a podcast called Sorcerer’s Orphan which describes the composition process and performance history behind many of the Flaming Lips’ most iconic songs. It is clear from his exposition that Drozd is in love with music, and brings heartfelt sincerity, technical proficiency, and a sense of levity and appreciation for the happy accidents that combine to form a creative work. The podcast consistently calls attention to the collaborative nature of the Lips’ creative process.

Hailing from Oklahoma City, The Flaming Lips still contribute to the community where they came of age. The Womb, which began as a party space and creative incubator for the Lips, is now home to Factory Obscura. Factory Obscura is a collective of local artists seeking to create large-scale immersive art experiences, something like Meow Wolf, the labyrinthine funhouse originally funded by George R.R. Martin in Santa Fe, New Mexico.

Despite their world-wide success, the Flaming Lips remain rooted in their hometown. As Sam Anderson writes in his history of Oklahoma City Boomtown (2018), however unlikely, Oklahoma City “was exactly the right place to grow a Wayne”:

The city’s wasted landscape was full of cracks, and those cracks were full of soil, and that soil contained precisely the right nutrients to nurture whatever outlandish micro-species of weedflower Wayne was—a spiky sort of kudzu vine with Venus flytrap heads, its tendrils eager to climb any structure that happened to be nearby, regardless of how rusty or uninspiring.[i]

A “weedflower” forged in the dirt of the Bible belt, Wayne creates his own inspiration. The lyrics he composes tell abstract stories of struggle and redemption. His plaintive vocals ruminate on life’s mysteries and heartbreaks, while retaining a world-weary optimism. 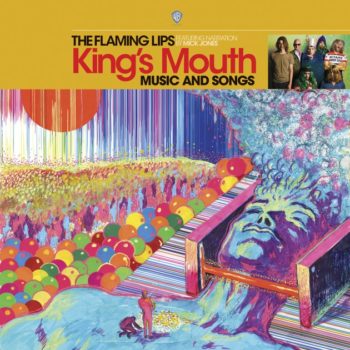 The Lips began their New Year’s Eve show this year in an underground cave in Tennessee, with a singalong to the melancholy classic “Puff the Magic Dragon.” Coyne announced that he would be changing the final verse where Puff slips into his cave to mourn the death of his companion Jackie Paper, to something more celebratory, literally about people celebrating together in a cave.

The dragon cave singalong has much in common, both in tone and theme, with the Lips’ new record King’s Mouth: Music and Songs. The record spins an adult fable about a beloved King who communes with the universe and brings people together because they can crawl inside his head and “see the stars, the storms, the swirls, and other worlds that are still there” even after his death. Instead of a funeral dirge, the song “Mouth of the King” emphasizes the “hope of a future that has yet to be lived.”

Although the heroic King dies, he lives on in the hearts of his people, a sentiment purely expressed in the standout melodic ballad “All for the Life of the City.”

The album is narrated by The Clash’s Mick Jones whose monologues appear on every track and provide cohesion without taking precedence over the music and lyrics. The song “Electric Fire” is the most similar to the music played inside The King’s Mouth installation, with the addition of vocals, a cosmic call and response, and a transcendent musical build. The final song on the record “How Can a Head” starts out sweetly and builds in symphonic grandeur, not unlike the intricate arrangements on the Lips’ acclaimed album The Soft Bulletin. Of all the tracks these are the two I am most eager to see performed live, preferably with epic volume and an Aurora Borealis-inspired light show.

Maintaining a sense of wonder, creating a world of rainbows and dreams, without flinching at the darker elements of human existence is the band’s strength. Collectively they have experienced addiction, loss, heartbreak, and numerous brushes with death, yet still convey genuine enthusiasm in their music, art, and performances.

Coyne seems to exist in a kind of altered temporality where age doesn’t matter and holidays are always marked and savored. Isn’t life boring and sad if you don’t create occasions for celebration? A secular Santa Claus, a giant Easter Bunny, a rousing refrain of Happy Birthday, none are out of place at a Lips concert and all are iconic because they bring people together in a joyful collective experience.

A Flaming Lips show can be enjoyed by people of all ages, much like The King’s Mouth installation, a psychedelic pop adventure housed in a mylar and tinfoil shroud. The DIY aesthetic of the installation is a nod to Coyne’s punk rock roots.The art installation, the stage show, and the album all exist in the same immersive media world the Flaming Lips are creating.

As New Media scholars Thomas Rickert and Michael Salvo point out, artists and musicians have been collaborating and mutually influencing each other, “creating feedback loops and immersive media worlds” for a long time. Breaking down perceived barriers between artists and musicians helps demystify, “the cult of the virtuoso or romantic genius that holds apart the realm of art from the common and everyday” and moves us toward “a postmodern postpunk re/mix hip-hop culture that values and utilizes all sounds that punctuate common experience and brings art back into the everyday.”

Bringing art back into the everyday is essential to the current success of community-based immersive art collectives, and it is no surprise the Flaming Lips have thrown their support behind Meow Wolf and Factory Obscura. As headliners for Meow Wolf’s inaugural music festival last summer in Taos, New Mexico, the Lips were in their element surrounded by large-scale art pieces including a giant gorilla, a stained-glass pyramid made of gummy bears, and a peacock with incandescent plumage.

Using visual imagery and lighting to accompany their songs and encouraging audience participation through musical experiments and physical engagement, the Flaming Lips break open the limitations of the concert form, channeling the spirit of the happenings of the late ‘50s and early ‘60s. Happenings were fundamentally multi-disciplinary, involved the active participation of the audience, and dissolved boundaries between the artwork and its viewer. The Lips’ influences of classic rock, science fiction, and psychedelia combined with their use of new and emerging technologies result in a unique brand of retrofuturism.

As Rickert and Salvo describe:

The [Flaming Lips’] experiments produce not only music but also participatory, immersive experiences that have deep affinities with today’s sophisticated digital and reproductive technologies and the techniques we see emerging. These experiments attend to the possibilities of bringing as many media forms together as possible, of heightening the total art experience, and of getting the audience involved equally as contributors to the music and affectively as part of the happening.[ii]

There is an earnest quality to the work Coyne and his band of collaborators are doing, and a generosity that transcends what we normally associate with rock star ego or artist self-seriousness. It is humbling to create a work of art and to know that it takes people to activate it (whether by singing along or crawling inside), and that what is created in that moment of people experiencing the work and participating in it is greater than what you could have conceived of or ever achieved on your own.

The King’s Mouth installation is currently on display at Factory Obscura in Oklahoma City.

The Flaming Lips are on tour this summer, though Ogden, Utah, is the closest scheduled concert.

Shawna Lipton is Chair of the MA in Critical Studies Program at the Pacific Northwest College of Art. She received her Ph.D. in Literature and Cultural Theory from the University of Wisconsin-Milwaukee. She is an interdisciplinary gender and sexuality studies scholar, filmmaker, and a cultural critic. http://www.shawnalipton.com/
@shawnaelizabeth