“Both can certainly be enjoyed for their beauty alone, but together the two really shine,” said cellist Leo Eguchi, co-founder with violinist Sasha Callahan of the Willamette Valley Chamber Music Festival. 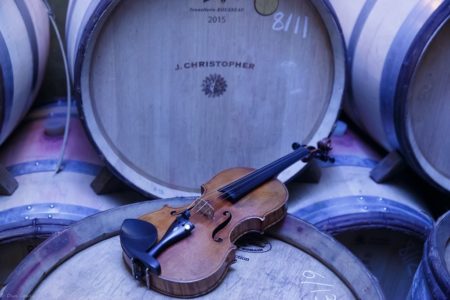 Eguchi, who studied physics along with cello, explains the magical pairing, which draws out the best in the wine and the music: “I experience each as a complex balance between dark and light. The wine’s darkly fruited notes match the brambly minor arpeggios of the first movement, while its minerality and high-toned acidity balances nicely with the heavenly calmness of the second moment. Both the wine and the music continue building to an energetic finish, marked by a rich darkness that lingers in the ears and on the palate.”

Whew! Such a comparison might convince you that pinot and a piece of chamber music can even transcend the blissful compatibility of that same Oregon red wine and Columbia River spring Chinook.

Based in Boston, Eguchi and Callahan decided several years ago that wine and music should be savored in the moment, in the vineyard (or barrel room)—and together. The couple, who have been married for 11 years and played together since 2000 as freelance musicians in various chamber groups and orchestras, saw an opportunity and an opening to bring chamber music to Oregon wine country, where such events are scarce. Sasha Callahan’s sister, Eve Callahan, a Portland marketing whiz with a lifelong interest in music, joined the couple to get the festival off the ground in 2016, and remains a large part of its leadership.

The festival’s third season opens Aug. 11 for three consecutive weekends at three Oregon wineries. Concerts dates are Aug. 11-12, Aug. 18-19, and Aug. 25- 26. The event has grown each year and sold out in 2017. This season, organizers added a third weekend with Sokol Blosser Winery and Elk Cove Vineyards, following two weekends at J. Christopher Wines’ barrel room outside of Newberg.

Eguchi, who will explain how the vintages are attuned to the music (and vice versa) during the two-hour concerts (with intermissions between the first and second parts), caught the wine bug about the time he and Callahan married 11 years ago. She is a born-and-bred Oregonian and no stranger to enjoying wine with her music. He is a serious wine taster and collector — and self-defined “map nerd.”

“I had a few ‘aha’ moments with pinot noir, from Oregon and Burgundy, that really socked me in my gut in the same way that a great performance of Beethoven does. Add to that my seriously nerdy love of maps and geography (and wine regions), and I was hooked on wine!”

As intriguing and layered as the wines will be the repertoire, to be opened with composer-in-residence Joan Tower’s “Rising, for string quartet and flute” on Aug. 11 and “White Water, string quartet No. 5” on Aug 12. A widely acclaimed composer of more than 100 pieces, Tower—who is celebrating her 80th birthday this year—will speak about her works, inspirations and influences during the Aug. 11 and 12 concerts at J. Christopher Wines.

Tower met Eguchi and Callahan at the Deer Valley Music Festival in Park City, Utah, several years ago, they hit it off, and she agreed to travel from her Red Hook, N.Y. home to work with the festival musicians in Oregon. She and her music have visited Oregon recently at the 2017 Chamber Music Northwest, which shone a bright light on contemporary and past women composers. CMNW featured her “White Water String Quartet No. 5,” which the Calidore Quartet played, the same piece the festival musicians will play Aug. 12.

Other music will include a string quintet by Oregon violist Kenji Bunch (with whom Callahan attended Portland’s Wilson High way back when), and works by Rebecca Clarke, Fanny Mendelssohn, Beethoven, Joseph Haydn, Franz Schubert, Sergei Prokofiev and Philip Glass. This year’s “pioneering spirit” theme shapes the festival, and a schedule and musicians’ biographies are on its website. In addition to Callahan, Eguchi, and Bunch, string players include violist Charles Noble, violinists Greg Ewer and Megumi Stohs Lewis, and cellist Marilyn de Oliveira, with Amelia Lukas playing flute.

Saturday concerts begin at 4 p.m. except Sokol Blosser’s on Aug. 25, which starts at 5 p.m. Concerts on Sundays begin at 2 p.m. Cost is $45 for general admission, $30 for members of the hosting winery’s wine club. Expect three wines per concert, beginning with a glass of rose, and different vintages in the first and second parts of the program. All concerts will be played in barrel or tasting rooms, due to better acoustics than the outside world provides and for the protection of instruments, which detest fluctuations and extremes in weather. Find tickets here.

Lean string quartets and voluptuous vintages are natural companions to be enjoyed in the company of a music-lovers. The concerts are designed to be anything but stodgy. “We want to create a relaxed, intimate environment where the wine and music complement one another,” Eguchi adds, “and allow people to taste and hear things they might not otherwise.”

Heralding the promise of the future: A choral Christmas season

Getting in the flow: Eduardo Cruz brings intricate imagery to Wild Arts Festival