“You have to say what you want to be heard”: Mac Smiff

The Portland writer, hip hop organizer, and activist discusses life as a Black Muslim in Oregon, the foundation of We Out Here Magazine, and monthly hip hop showcase The Thesis.

Portions of this story were first published by Oregon Humanities, under the title “Just Go Do It”: Portraits of Black Muslim community leadership in Oregon. Read the original here.

Growing up, I learned about Malcolm X, Muhammad Ali, and Kareem Abdul Jabbar—international Black Muslim icons—on my own, with no thanks to the Oregon school system. But where did Black Muslims feature in the story of Oregon?

Like the icons I’d learned about before, this was a question I had to find answers to for myself.

In late 2020, I started a Zoom interview series called The Blacktastic Adventure to highlight the variety of stories of Black life in Oregon. For the series’ second season, I received the support of the Oregon Humanities Community Storytelling Fellowship and partnered with photographer Intisar Abioto and videographer Ifanyi Bell, via Open Signal Labs, to bring the interviews to life. I wanted to feature Black life in specific geographic regions of the state, hash out conversations happening within the Black Oregon zeitgeist, and create profiles of individuals from specific communities within the Black Oregon population.

As part of this project, I wanted to explore the stories of Black Muslims in Oregon—and why those stories weren’t more well known. One of the people I spoke with was journalist and activist Mac Smiff, who had a pretty blunt take on where this ignorance originates.

“Most people don’t understand enough about Islam to be more detailed in their Islamophobia,” says Smiff.

“I’m more obviously Black [to them]. Oregon is just so intrinsically racist and xenophobic that just being a Muslim becomes a hassle for a lot of people. I feel like a lot of Muslims in Oregon make being Muslim a secondary character trait.”

From “Rapping Rapping” to The Thesis

I first met Mac Smiff during my time at The Skanner. It was 2013, and Smiff was transitioning from a young rap career to a writing career. He recalls performing at the Portland State University park blocks during his lunch break, still wearing his work uniform.

“I was rapping rapping,” laughs Smiff.

In the early 2010s, he began blogging, and soon after, he started writing for We Out Here Magazine, a Northwest hip-hop lifestyle blog, where he eventually became the editor and owner. Since taking the helm at WOHM, Smiff has put a major emphasis on engaging the city and country alike with the story of Portland hip hop.

Seeing and filling community needs was something instilled in Smiff early on. In 1992, his family moved from New York to an area of Clackamas that is now Happy Valley. They found community at the Muslim Community Center of Portland, and his parents were involved in helping build the Islamic Society of Southwest Washington masjid in Vancouver.

At WOHM, Smiff has created a platform for a number of emerging writers (full disclosure: I wrote as a columnist for WOHM off and on between 2014 and 2016) and used the platform to influence politics. In particular, the site has shone a spotlight on Portland’s police profiling of hip hop, as well as police brutality and corruption in general.

The blog, along with local partners such as DJ Verbz, Vortex Music Magazine, and Portland State University, has also fostered the rise of The Thesis, one of Portland’s premier hip hop showcases. The monthly event at downtown Portland’s Kelly’s Olympian has been lauded for consciously incorporating local photographers and an unwritten “no more straight dude shows” rule, ensuring every show highlights the diversity of the local scene.

“People have said The Thesis is activism, in a way,” says Smiff, “because it does seek to teach by example.”

Say what you want to be heard

When Portland’s racial justice protests began in 2020, Smiff used his media experience and skills as a “connective tissue person” to provide regular coverage on the ground and serve as a consistent mouthpiece to voice the sentiments of the community to the press. In fact, he emerged as one of the most quoted people during the 2020 protests and amassed a large following on Twitter.

Smiff tries to keep the attention in perspective. “Most of these people are following me because they just want some kind of protest news,” he says. “They want some information on what’s going on with the cops. They want some rhetoric to run with.”

A little over a decade ago, Smiff was rapping in his work uniform at the PSU Park Blocks. Now, his imprint can be found across the city, from the crowds he addresses at the Multnomah County Justice Center and Kelly’s Olympian, to the youth he educates at the Numberz FM content camp and his WOHM creative office.

Ultimately, he says his speaking acumen comes from a simple lesson learned while on stage and from working for years in the media: “You have to say what you want to be heard.” 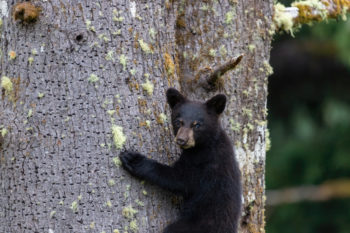